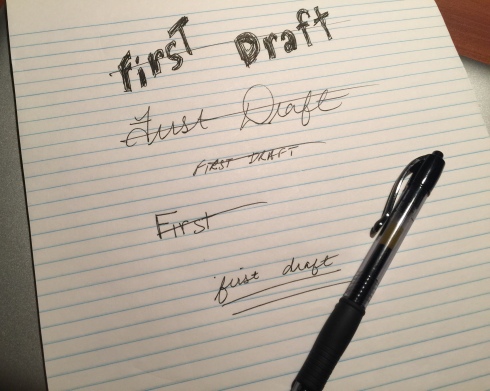 One thing that I have learned over the years is that it can be pretty dang hard, if not impossible, to edit something that’s not yet actually written.

Yeah, brilliant, I know, but for many years I wrote, trying to edit at the same time. And while typically driving me to drink, that process really…slowed…down…my…writing. I’ve heard the old idea over and over, “Just get the words written. Get that first draft down and worry about the editing later”.

Well, you know what? That’s true. True as can be. Just write the words, even if you have to make up some new ones to finish the article, feature, chapter, or book. Because you can’t edit what isn’t finished.

I’m not saying it’s easy. No sirree! I still fight the urge, even in just this short passage, to go back and prematurely edit and rewrite. It’s a mindset I have to continually focus on. The first draft is just that, a first draft. Don’t expect perfection. Don’t expect a polished piece of prose that rolls off the tongue. Do expect to edit and polish later, when you can consider the whole piece of work and tailor your words to help the flow and transition of your article, story or novel.

And when it comes to that novel, know that no matter how many times you edit that first chapter and no matter how perfect it is, it means nothing without additional subsequent chapters, does it?

So let’s try and get those down so we actually have something to edit later, yes?

This site uses Akismet to reduce spam. Learn how your comment data is processed.

Gerald is an internationally published writer of short stories, fiction and non-fiction, also writing for the outdoor recreation and park equipment industry and the craft and distilled beverage industries. He owns and maintains www.inkandembers.com,  a grilling and storytelling site.